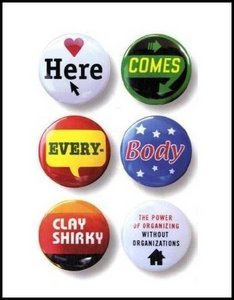 Shirky discusses the way the internet has made coming together and communicating infinitely easier for people, and the ways in which the structure of certain groups at places like flickr or Meetup facilitate this getting together. He also talks about internet groups that have had startling effects in the real world…..like the organisation of flash-mobs, or mass protests that have made big corporations change their policies, or channels of communication that have enabled political activists to keep tabs on one another.

He also discusses the intimacy found in groups on the internet, which explains why so much of the conversation on Facebook or Twitter appears to be so facile. These aren’t people tweeting messages of importance to the world, but rather people tweeting to five or so close friends – friends who are happy to see pix of their new haircut, or to read about what they had for lunch. These snips are not meant for the cold outsider’s eye, but for the close coterie of friends that most people have, within the giant outer wrapper that is Facebook or whatever.

He also discusses celebrity – be it the celebrity of a well known film star or the celebrity of a famous blogger. In these instances two way communication is obviously severely restricted, and the role of friend (found in intimate groups) morphs into follower. There is massive disparity between those on the internet whose work is popular verus not so popular. Basically there are very few people whose output is prolific, or who are extemely popular.

There is also a lot of fascinating discussion about Wikipedia – about how its ethos has encouraged good practice, about the rules in place to prevent vandalism, and about the ways in which different people contribute towards it. Did you know that they ‘lock’ contentious topics until people’s temper tantrums have quietened down? Whilst the likelihood of these pages being vandalised is high only Wikipedia members are allowed to edit them. At any given time about 10% of Wikipedia’s pages are locked in this fashion. Another thing I found fascinating is that a lot of its pages start out as ‘stubs’. This means that someone will just put down a sentence or two – merely to indicate that the topic needs covering. In time, more and more detailed information will be added to the topic. One example is ‘asphalt’; the original description laid down for this was “Asphalt is a material used for road coverings”. One hundred and twenty-nine people went on to edit this topic – and the description for asphalt now has the level of detail we associate with Wikipedia entries.

The book also celebrates other generators of open source information available on the internet. All the hundreds of people working on things like Linux programmes, or contributing to Genbank (a public database of genetic sequences), or contributing to one of the myriad other organisations giving out their knowledge and expertise for free. I am personally always blown over by the generosity of people on the internet, and the amazing access to information that is there for the asking, and thoroughly enjoyed these parts of the book.

Another aspect of modern communication that was explored was the collapse between amateur and professional in several areas of life. The reproduction of music, journalism and photography, have all been deeply affected by the rise of the internet and technology which enables all of us to cheaply and easily do these things. The author doesn’t say that these boundaries have disappeared completely, but the perimeters have changed.

All in all I found this an interesting read. A good book for anyone who uses the internet – and as the title suggests – don’t we all.